Family of Seven. Evicted. Now What? 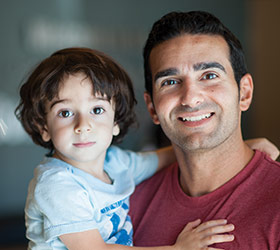 Steven and his wife are kind, compassionate, and selfless. Already the parents of a 10-year-old son, they took on a big challenge when they adopted four more children whose parents had been incarcerated. And, blink, they were now the parents of five kids under age 12.

Everything was going well until the day Steven lost his job. Their stable family situation suddenly became unsteady. Steven found another job, but with a big pay cut. They fell behind on bills and payments. Soon, an eviction notice was taped to the front door.

Steven turned to the one place in town he believed he could find help: The Salvation Army.

Army staff quickly rallied to the family’s side, helping out with new school clothes, coats, and food. They helped Steven get current with rent payments. And they offered plenty of encouragement and hope along the way.

Steven now works two jobs to make ends meet, and though it’s a struggle, they’re managing to live on their own.

“I am grateful for the love and support we found at The Salvation Army,” Steven says. “They kept my family from being forced out on the streets."

“Thank you for supporting The Salvation Army. Because of you, we were able to keep our home and keep our family together.”