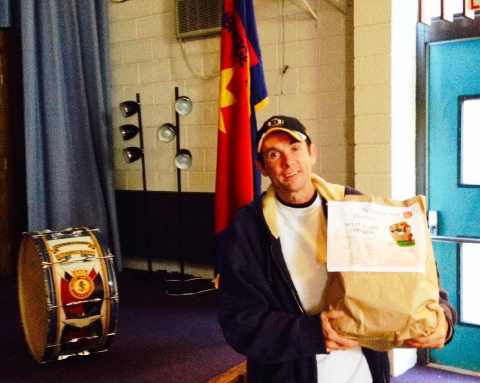 A Cambridge Man With Very little...Gives a Whole Lot!

Dennis McNultey walked up Green Street carrying two bags of groceries. As Karen Meehan (Director of Operations) watched him approach the drop-in center at the Cambridge Corps, she assumed he had gotten some money to buy a few things for himself. It turns out that wasn't the case at all.

In the 60's, Dennis was a young boy living in the "projects". He remembers the struggles his mother went through after his father left her to care for the children on her own. A program called Globe Santa provided Christmas presents, or the family would have gone without. He also recalls Morgan Memorial helping with clothes. These early experiences of help from others became an important part of Dennis' character.

Dennis has stayed in our emergency shelter on and off since 2005. He has struggled with homelessness and addiction, which often go hand in hand. We have seen him come and go, sometimes fighting valiantly to stay sober and sometimes losing the battle. The Salvation Army of Cambridge has also become a church home for him. Most Sundays, he sits in the third pew listening intently to the service. Dennis always has a smile and hug for those around him. He is honest about his struggles and requests prayer when things are really hard. It was on one such Sunday that Lt. Michael Harper announced that we needed the church to help with our "Stuff A Bag" campaign. We provided paper bags with grocery lists taped to them that once full would be given to families at Thanksgiving.

When Dennis walked down Green Street with two bags, he was doing his part to give back. He was actually the very first person to return a Stuff A Bag donation. He is homeless and hurting, yet used what little he had to help other people. It reminds me of the widow who gave her two mites. I asked Dennis about this story and he said, "I just wanted to help The Salvation Army, because they help me. Cambridge Corps is a place where you can go when you're weary. It's a place to bring you back to you." Thank you, Dennis, for reminding me what it means to give. This season, I am grateful for you.