Old buddies Mark and Frank
lived in the same assisted living complex, enjoying each other’s company in their later years. But when the facility was closed, they were moved into other local housing with government help. Social Security benefits, on which both men rely, stalled for a few months while the new addresses were being processed. 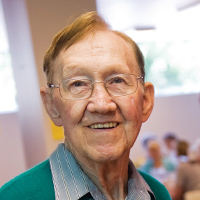 Mark and Frank had no way to pay the rent in the meantime, and they were very worried about what would happen next.

When The Salvation Army heard about their plight, they stepped in to help. They paid a part of the men’s rent so they could stay in their apartments without incurring additional fees. They gave household items. They provided enough food to stretch Mark and Frank’s limited food stamp budget.

They even provided a birthday cake, donated by a local bakery, on Frank’s big day; the men celebrated by sharing the cake with their new neighbors.

Mark and Frank are so appreciative of The Salvation Army’s help, and they both know that it couldn’t have happened without your compassion. Thank you very much!