How You Helped When Hard Times Hit 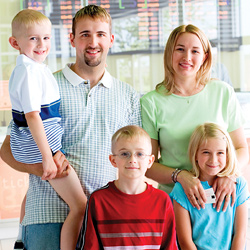 Jim was desperate. He’d recently lost his job of 10 years when the company went out of business. His car wouldn’t run. His bank was pressuring him for a mortgage payment he couldn’t make. And he had four children to feed.

At the end of his rope and with nowhere to turn, Jim called The Salvation Army and asked for help.

‘I Can’t Believe All the Things She Helped With’

A caseworker immediately got on the job, providing food and meeting other needs for Jim and his family. She helped him work with his bank to defer mortgage payments for six months and refinance at a lower rate. And she helped him keep health care coverage for his family, easing one of his greatest worries. “I can’t believe all the things she helped with,” Jim says.

Today, Jim is working full-time again, well on his way to regaining his financial footing. But just as importantly, thanks to your faithful gifts to The Salvation Army, a once desperate man now feels hope again for the future.

“I never thought I would need help from The Salvation Army,” says Jim, “but they were there for us when the bottom fell out.”