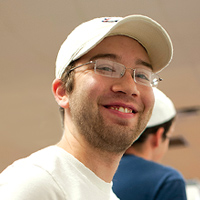 My name is Chris. As a homeless teenager, I went from group home to group home. It never lasted long because no one could communicate with me or help with my problems. And I always ended up losing my temper.

When you have emotional issues, life is hard enough. But when you’re deaf and nobody around you knows sign language, it’s so much more difficult.

I felt stuck. It was so depressing. But all that began to change when I went to The Salvation Army. I was 22.

I could tell they really cared, but because they didn’t have an interpreter, there were communication problems. I still had outbursts, and sometimes they had to remove me from the building. I was out of control.

They Never Gave Up on Me

But The Salvation Army never gave up on me. They prayed about how to help me, and four of them took sign language classes. One began to mentor me, and helped with vocational training and finding a job. That man is like a father to me today.

I started gaining control over my anger, mostly because I had found the love and support I had so desperately needed. Now, at 24, I work as a volunteer with The Salvation Army, I have a part-time job, and I live in an apartment with other persons with disabilities.